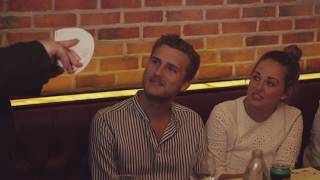 So as the new season here in Dubai kicks in, I decided to get some footage of me working at my regular Thursday night gig in the Fabulous Award Winning restaurant, Couqleys French bistro in the Movenpick Hotel, cluster A in Jumeirah Lake Towers, Dubai.

For the uninitiated, the term "Close-up Magic" refers to magic performed for small groups using everyday objects such as cards, coins, ropes, small common objects, and even borrowed items. Entirely reliant on difficult sleight of hand, Adrian's highly interactive close-up performances feature magic that happens just inches away from the audience — and even in their own hands!

If your event will have a small number of people in attendance, a single formal close-up show works well. However, many events have hundreds or even thousands of people in attendance. Under these circumstances, Adrian will perform "Strolling Magic" (sometimes referred to as “Walk around Magic”) in which he moves between tables or small gatherings of people to perform a few minutes of close-up magic for each group. Strolling magic is a fantastic way to get people chatting at your event, and can be paired with a stage show for a complete entertainment package. Keep in mind that strolling magic works best during a cocktail hour or mingling period, but does not work well during a meal when people are eating.